Alex Hutchinson, creative director behind Far Cry 4, has openly stated on more than one occasion that interest places and times unexplored, and no doubt that with this game satisfies the appetite for the exotic, since the that region cultural elements converge India, China, Nepal, Pakistan, Tibet and Bhutan, which lends itself to a rich concoction I do not remember ever having seen portrayed in a game, or at least not as thoroughly.

Then you have a massive wooded valley surrounded by enormous mountains, which inhabits fauna composed by tigers, wild dogs, leopards, eagles, wild boar, crocodiles, elephants and a long etcétera.La food chain is active, but also animals, are Kyrat residents, a province in conflict, oppressed by a charismatic and demented chief named Pagan Min, who Path guerrillas Dorado (Golden Path) tries to overthrow. That is the situation and that is the world of Far Cry 4 in which you play.

If it sounds familiar, it‘s because it is. At least from Far Cry 2, the series has made her starring in between 2 factions on a collision and the user, the figure that tips the balance in favor of one of them. This is not the exception, though distinct, self Pagan Min reminded me a little of Vaas Montenegro -antagonist of Far Cry 3, it is a psychopath who is sympathetic, to the extent that sometimes makes you want to help.

Anyway, the point is that the unique identity of Far Cry 4 lying on the surface, but underneath is exactly the same as in the previous delivery, and by that I mean the structure and gameplay. In fact, the start of the adventure is essentially the same as in Far Cry 3, and objectives of certain missions were also strangely familiar to us.

Far Cry 4 is a game where 90% of the time is spent collecting items and shooting everything that moves. Kyrat is a province in civil war, and the followers of Pagan Min lurk everywhere, controlling strong and towers that must be conquered to reveal the map, expand the penetration of the rebels and thus unlock new tasks. 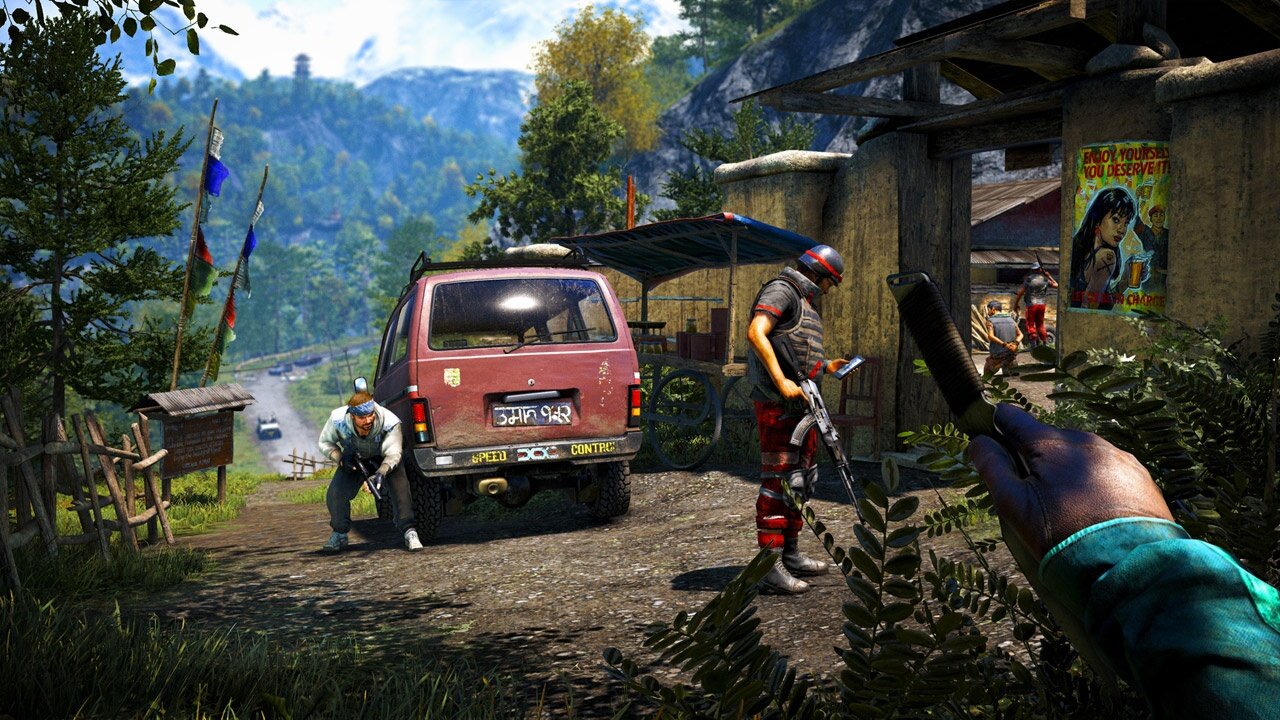 The animals, in turn, serve as raw material to increase the capacity of the protagonist Ajay Ghale, and so can carry more arsenal. It is exactly the same as in Far Cry 3, but instead of jungle, is forest and mountains, and now let you ride an elephant from time to time.

The formula works very well. The controls are solid and responsive, and the share of activities is so vast that definitely will not achieve an income to finish the main story, and even talk about the side missions and tasks of collection, for example help a Malaysian designer fashions gather material for his next set, starting every political posters attached by Kyrat, typical chests, letters Ajay‘s father, and the list goes on. 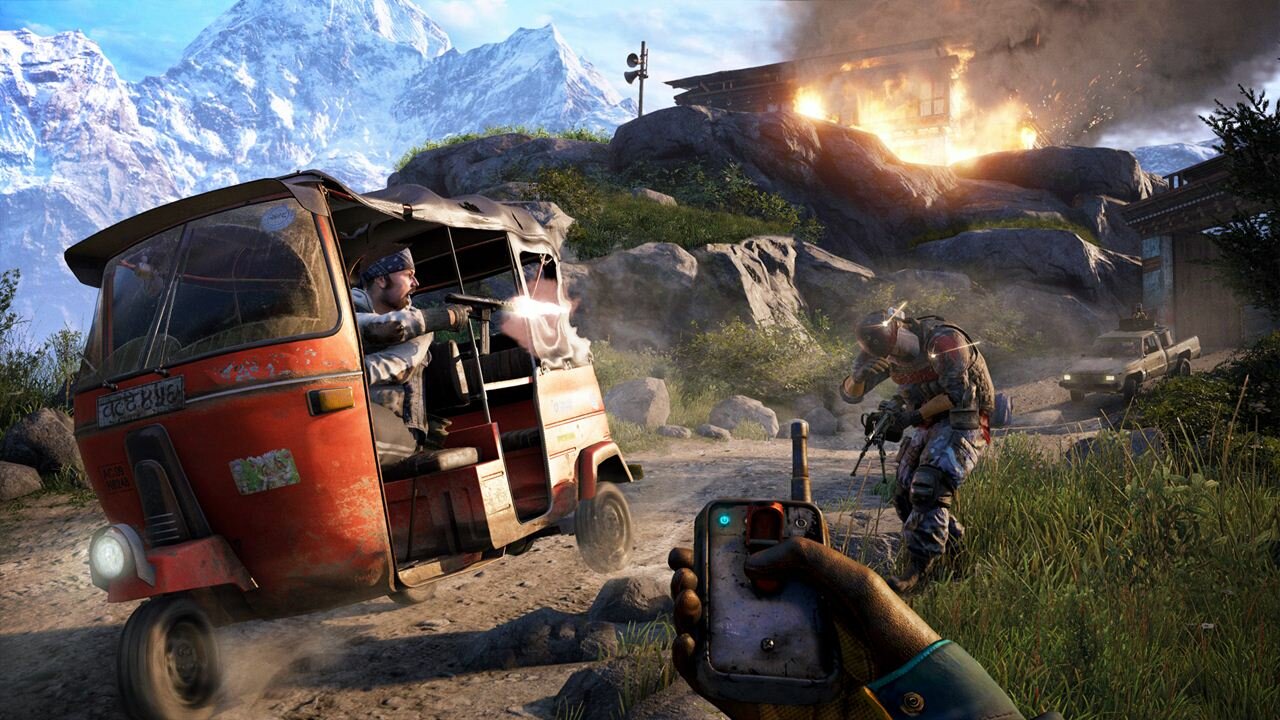 You are walking down the path and stumble upon a girl who begs to rescue his family. Nearby is a house that has been taken by the Royal Army and you remove one by one the soldiers, without causing alarm, to finally free the captives. The family pays you some rupees and go your way, but before taking two steps, you are attacked by a pack of wild dogs. Once released, the destazas to sell your skin to a sherpa who patrols the area. Hence, you embark on the way to a tower. As in Far Cry 3, reaching the summit supposed to decipher a small vertical maze, and once at the top, you can reveal a part of the surrounding landscape. Low, you take a glider and‘re heading for what follows.

The above describes either a regular day Kyrat, an inspiring place that even with abundant recycled materials, is a deep space invigorating the game’s narrative. One in which by the way, all players have substance, personality and very clear motivations. Moreover, the decision often puts the player in morally gray situations that generate a little thought: You’ll burn the enemy or drug sembradío‘ll do yours to sell the goods and give food to your people?Another interesting idea is to Shangri-La, a mythical paradise where some missions that occur operate an alternate storyline, full of legend and fantasy. Here, no fighting the Royal Army, but masked monsters that are breaking the harmony. It is a kind of parentheses semirealista tone for the rest of the game, which arouses curiosity in the same way they do in the temporal anomalies Unity or spin-off Blood Dragon Far Cry 3. 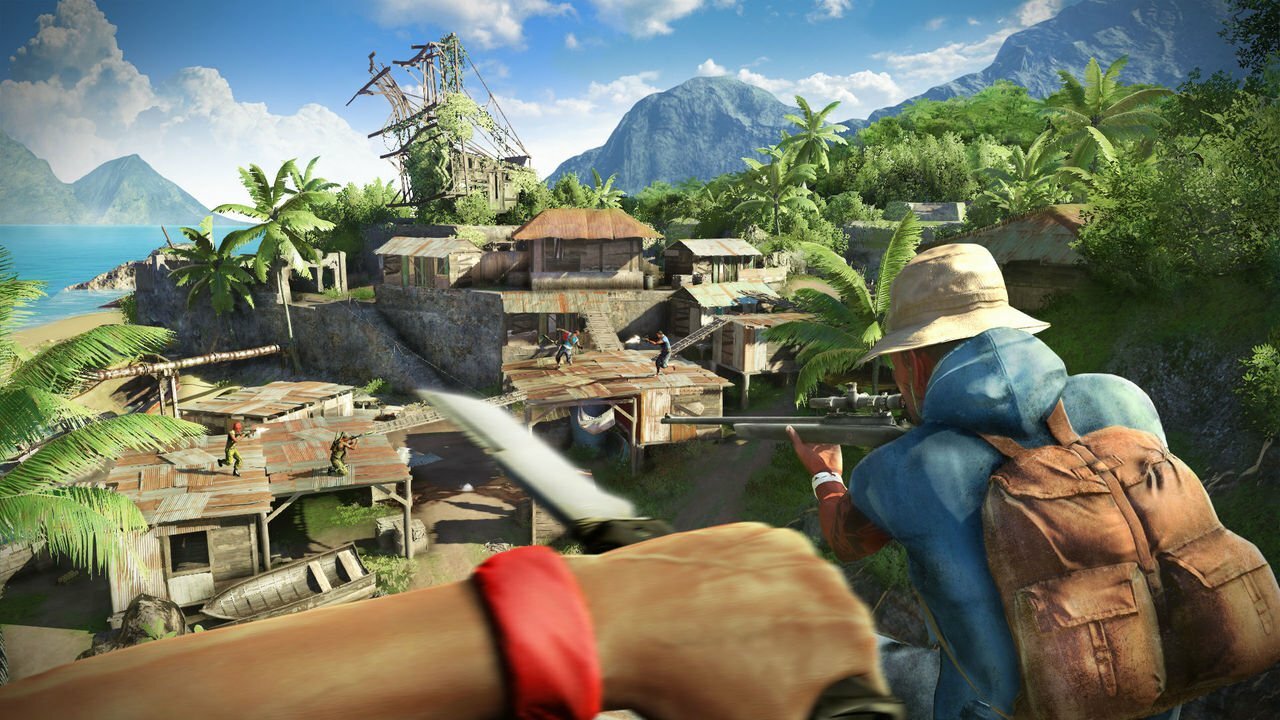 Another success is the management system now enhanced, which lets you place the car on autopilot to shoot the pursuers without fear of crashing, and I also liked the suit flying squirrel (wingsuit) to descend at high speed on steep slopes of Kyrat. Climbing, on the other hand, I was disappointed.
And since I speak of expectations, I can not say that the overall presentation has surprised me. Yes, Far Cry 4 looks better than its predecessor, but does not represent the same graph leap and got Assassin‘s Creed or Call of Duty, which I attribute to the distribution of resources between versions of current and previous generation. The destructiveness is reduced almost entirely to vehicles and, as I said before, Ubisoft recycled too many items to pass up. That is, if they play Far Cry 4, more than once is going to ask if they saw the same house or temple elsewhere. The golden rule in game design is economy, but it took maquillarlo a little more.
With regard to mechanical, Far Cry 4 falls short of any decent FPS with the addition of melee, here provides more versatility. There is broad skill tree with Ajay Ghale which is able not only to stab a clueless enemy, but also to throw a knife guy next door at the same time, for instance. This was possible in Far Cry 3, and there are passive skills that increase strength, improve health or optimize the skills of collection, and the effect of injections.
The crafting or manufacture of items remains pivotal in Far Cry 4, and that means hunting everything you can and also boot plants to create sera that enhance the talents of hunting or recover the character. Again, all this was possible in the previous delivery, and the only thing that changed is that talents are now grouped into 2 categories: Tiger, Elephant, instead of Spider Shark and Garza. It is a nominal change, but not function. 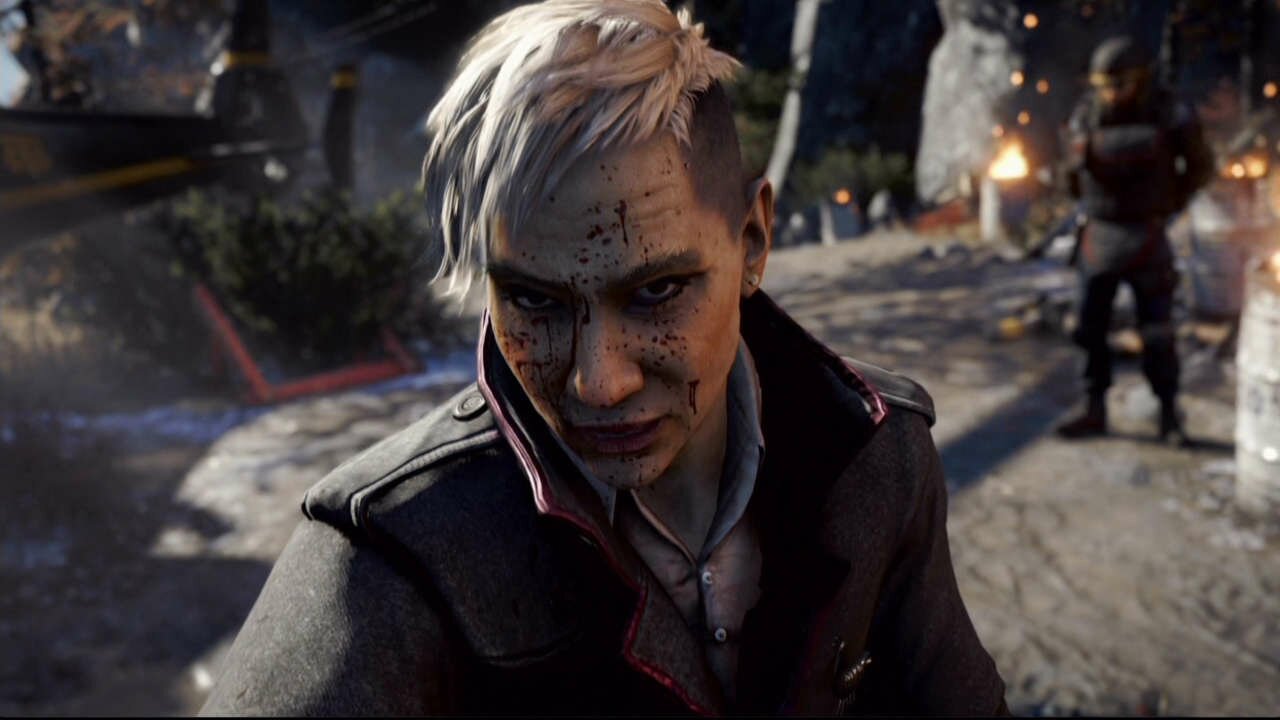 Hand in hand with this, is of course the progression of the character itself. To the extent that you accumulate experience, sums credits to unlock skills. That’s one side, on the other are the rupees you find in the pants of an enemy or killed in the typical trunk and with whom buy a new rifle, camouflage, body armor, the peephole so powerful. And in Far Cry 4 there is an additional currency which is the Karma, from spontaneous events which are invested in reinforcements if you have a friend to play co. These allies do not always get to where you are or if they do, maybe it’s to late or can not get to where you are. Sometimes contribute, but you can play the full title without using it at all.

Returning to the subject of the cooperative, this mode was touted as one of the major improvements for Far Cry 4. The good news is that, when it works, is fast and adds an extra dose of fun to a title already loaded action as well as a valuable ally to take by assault certain strong extremely guarded; poor, is to arrange the items is not easy, and the same applies to the multiplayer mode with interesting ideas, but little fertile, where nothing else is few ways, but some of them are difficult to access.
For 20 hours, about the game, Far Cry 4 is stuck once and I drove to the main interface; I fell for the texture map in multiplayer once too and low frame rates, although rare, is a reality, particularly in Shangri-La, in the cinematic that plays to unlock a new region on the map and at certain times where many NPC agglomerate or too much action. Nor is it strange that passes through a place, you eliminate all enemies, you get back a minute later and have respawned. And rare detail, but worth mentioning is the contrast. In options there is a scale for the color palette, brightness and others look as it should be; however, entering caves, such is not feasible to distinguish a wall of a corridor and disorientation is the consequence.For audio, Cliff Martinez did a good job of musicalización, to generate an atmosphere consistent with the spiritual tone and, for lack of a better term- Tibetan experience. The only flaw is that sometimes lip-sync and NPC often repeat the same phrases, but the drums and instruments typical air of the region are perfect for the mood. 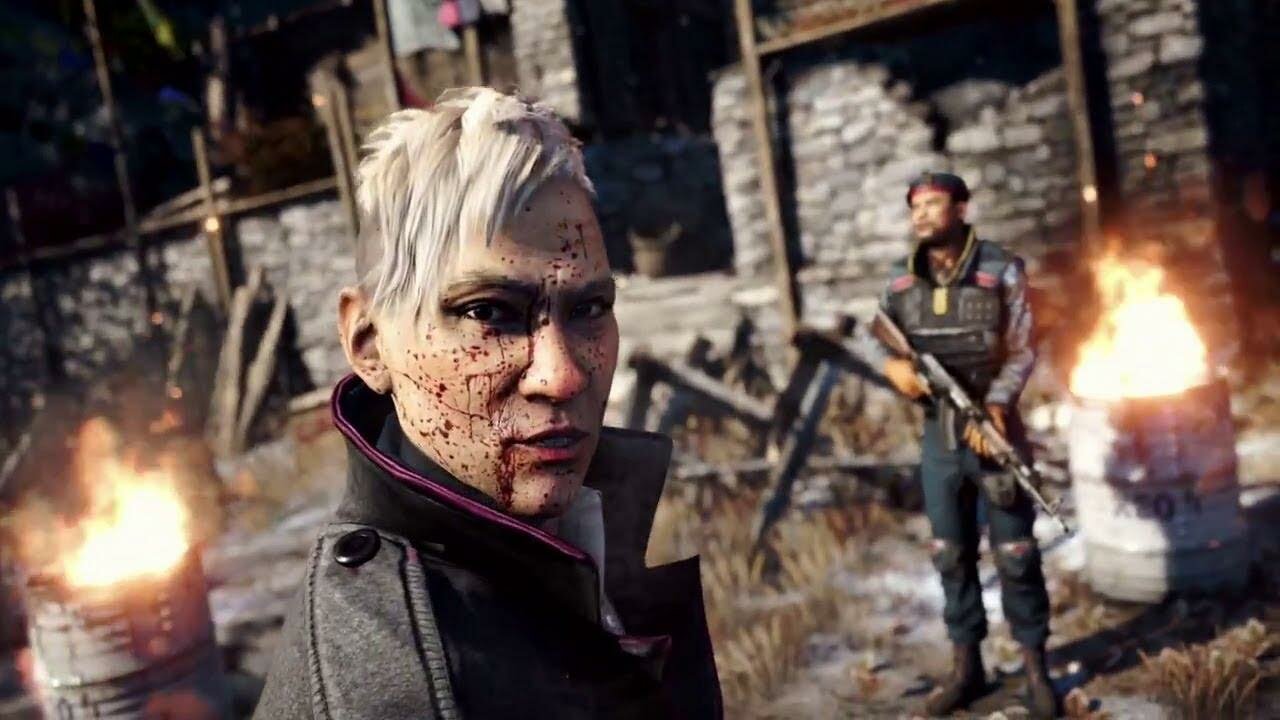 Far Cry 4 is a good game. Even if you played the third installment, I will entertain for 1 or 2 months. His story is interesting, the characters, friendly and the world is as deep as seductive, but if you’re a true evolution of the formula, as we witnessed a couple of years, here not getting. This sequel implements the recipe of his predecessor virtually verbatim and that new to the game, it is not within the genre. Amalgam is strong, the strength of both the context and history, shape it, but background, experience is too familiar.

Sony may owe you $50 if you own a PS Vita, thanks to the FTC