The Sims 4 Review PC – Bored with life? Create A sim

Sims, like Football Manager, falls into the category of those dangerous games which remove the player from their normal life, with all its day to day responsibilities, and places them into a slightly vacuous but ever so compelling fantasy land in which time more than skill is the deciding factor in success. Depending on how you look at it Sims 4 is the procrastinator’s worst nightmare or their best friend. Tired eyes, not time are the limiting factor in this neighbourhood.

I suspect that a lot of people would admit to being a tad materialistic, society and the economy expect and require citizens to be just that. Today success can be measured in material goods accrued, Sims 4 takes this concept of modernity and sticks with it. Yes, emotion and family comes into it, we will have to come to that later, but the core game-play revolves around the ever increasing need to have better stuff, and a bigger house. Whether or not this is an ethical or even sensible approach to life is immaterial, fun and not morality is the preserve of the video game industry, and materialism is fun. 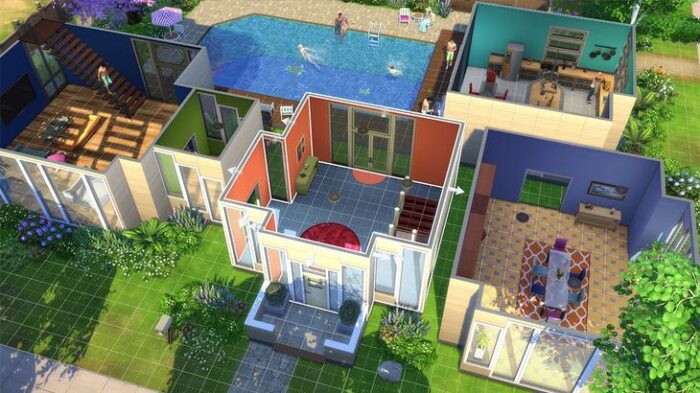 At the outset you are invited to create your first Sim, apart from the obvious amusement of playing around with a vast array of differing body shapes and clothing options, you also set your Sims personality and traits. Of the many options given it is sensible to match them up with the chosen path for your Sim. Be they career driven and a genius or family orientated and materialistic this is where you will give your Sim the tools they need to succeed in their chosen path.

The daily grind…an idiom that becomes literally true in Sims 4. Work is your key to success, or rather, it is your key to that big TV and nice shower that your materialistic Sim requires to keep them happy and motivated.

A career is easy to select, just go to your phone and select from a variety, ranging from tech support to astronaut. Once you have selected your career you embark upon a journey of promotion for the sake of money, and in terms of a career driven Sim, a journey of promotion for the sake of promotion. In order to gain promotion you have to complete a certain amount of daily tasks, if you have chosen a career in tech support this may be a certain amount of games modded or hours of programming practiced.

Unfortunately this is where the ‘grind’ comes into play. These daily tasks take time, time at the expense of other aspects of Sim life. Whilst I somewhat negated the effects of this by sitting Sims at two different computers in the same room and getting them to socialise at the same time as completing their daily tasks (Sims 4 allows your Sims to multitask, a sorely missed feature from previous iterations) I still found it to be a tiresome mechanic, like all grinding it is rewarding, but the game allows for little strategy in the method that you choose to go about completing these tasks. The same can be said for work itself, once your Sim has departed for work you have little control over their day. The occasional yes/no option bar might drop down, and you have a few other options allowing you to give some input, but you do all too little whilst your Sim is at work.

A happy Sim is a productive Sim. In order to do well at any given task it is important that your Sim is in the right frame of mind. An uncomfortable Sim will gain less from romantic interactions than a Sim made playful from taking a bubble bath. Romantic interactions between Sims are important if you want to grow your family. Whilst socialisation is core to the game-play it does seem to take a back seat to work and making money, really this is down to the player, but it is hard to remove yourself from the rush of earning more to buy more at the expense of a social and romantic life. I might have been more inclined towards socialising and leaving my house if the world was more exciting. Sims 4 is a much smaller world than that of Sims 3,whilst this takes some of the excitement out of the game it does allow for a quicker understanding of the world that your Sims inhabit.

The game looks nice, bright colours and pretty surroundings help to create an atmosphere not dissimilar to the Californian sitcom Modern Family, the build mode is simple and easy to use, and apart from the typical slightly dodgy Sims camera angles, is really rather good. You feel that you have a lot of control over the style of the house, you can do all sorts with kitchen cabinets, and you can even move a downstairs bedroom upstairs without demolishing it when space begins to become an issue. Even if Sims 4 has lost some of Sims 3’s features this new build mode goes someway to making sure you are concentrating on what has been gained and not on what has been lost.

Review Google Pixel – The best Android phone ever made

A Way Out – Available worldwide on Xbox One and PlayStation 4

Xbox One X Project Scorpio is BACK In Stock