It’s cold outside. School is out or you’re off from work. Maybe your family is gathering for the holidays or maybe you’re lucky enough to have the whole house/apartment/closet with a TV, internet and your gaming console of choice to your self. Regardless, what happens outside the bullet ridden, explosion torn, 12 year old infested war zone matters not. You have an an extremely important decision to make. Just which battlefield will you be on this Winter? Battlefield 4’s of course. EA’s Dice have outdone themselves once again. This time around you’ll get as slightly more improved multiplayer you’re used to from past releases as well as a story that is more about the soldiers in a war rather than the war itself. 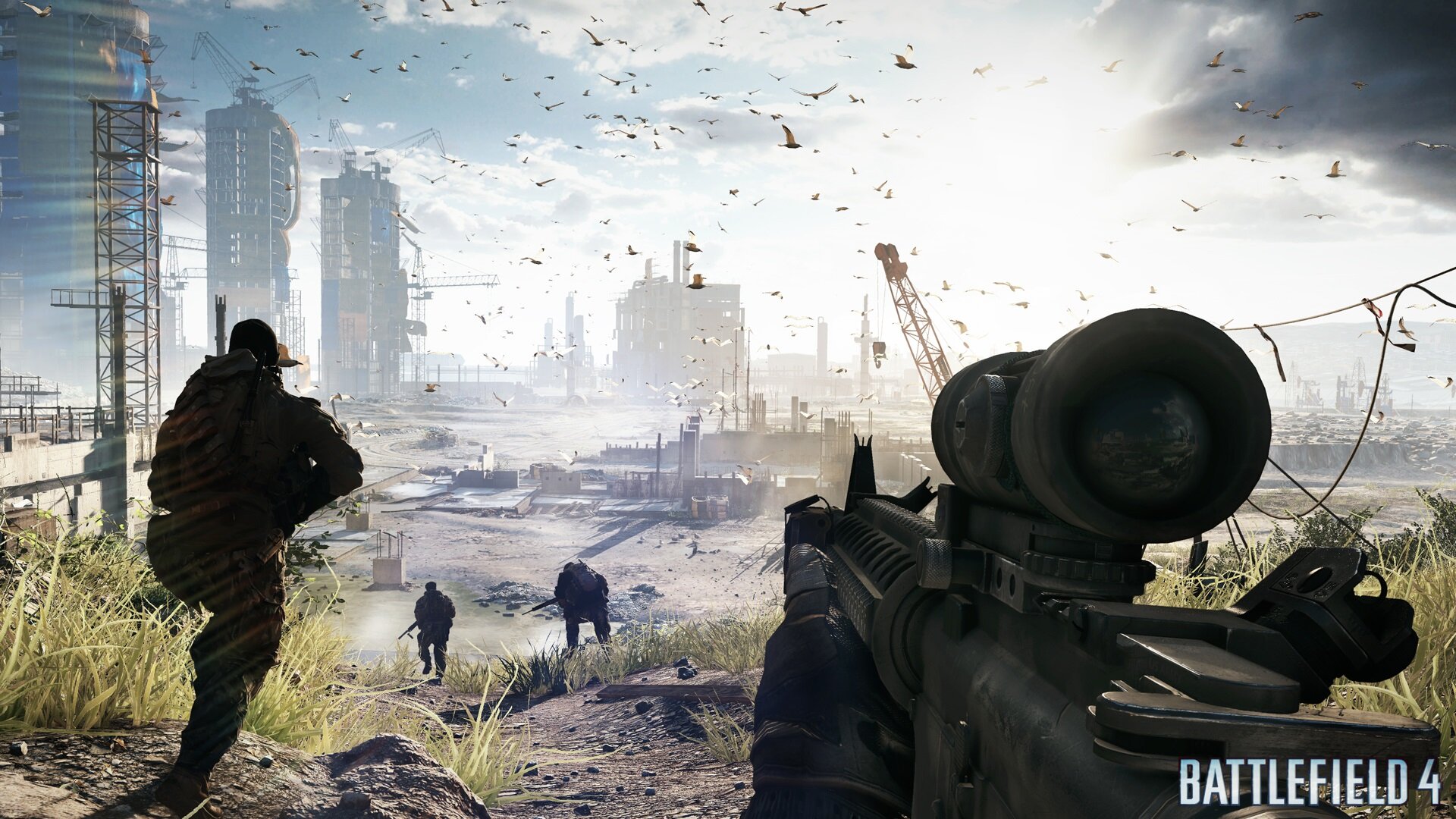 I’ve had the pleasure of playing both the PlayStation 3 and PlayStation 4 version of the game. The PS3 version of the game looks very similar to the previous release, Battlefield 3, with improved physics and textures. Not to talk down on current-gen, but upon jumping into a PS4 lobby I was blown away by the crisp 60 frames per second and 1080p image it provided (native 900p on PS4 and 720p on XB1 for you resolution junkies out there). Next-gen is here and boy can we tell. Some folks will tell you they can’t see the difference, but those people are obviously not big into shooters. If you’ve taken any amount of interest toward them, you’ll know that frame rate is the crucial defining factor between realizing that soldier ten feet out is indeed a soldier and not just a crumbled piece of rock. Single player does outshine multiplayer as it has more cinematic moments, but when the arena morphs in the middle of combat thanks to what Dice is calling “levelution”, watching that skyscraper topple over on “Siege of Shanghai” (the E3 and beta map) is just as appealing as the many explosions featured in the campaign. For Dice, multiplayer has and always will be the most important aspect of Battlefield. What sets Battlefield 4 apart from other AAA shooters is scale.

They have always tried to make an experience that makes you feel small, yet significant, so as to make your conquering victory that much more thrilling. That being said, the maps packed on disc are small enough that a brisk jog to that enemy flag isn’t too much of a bother, but large enough to entice still vehicle use. The only problem I have with the size of these maps is the fact that the current-gen versions still only support 24 players online. This isn’t anything new to console gamers, but PC gamers can already tell you that Battlefield is meant to be played mini-army versus mini-army. This naturally is no such issue for those of you looking to upgrade to or are starting out on the PlayStation 4 or Xbox One version of the game, both supporting a whopping 64 players online. That number of players running around wreaking havoc is truthfully the best way to experience any Battlefield game. 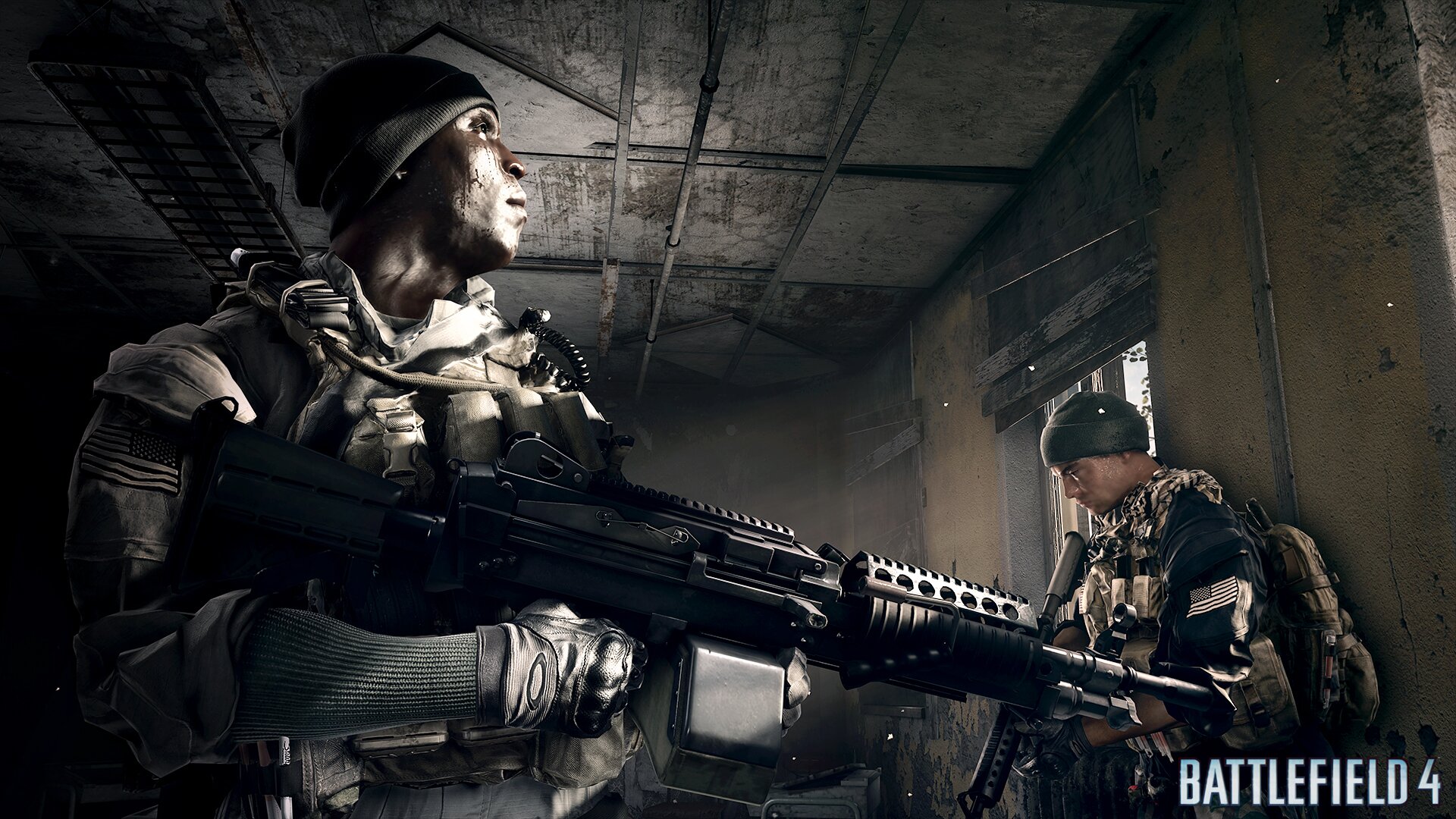 Having such a large number of players does instill fear for me regarding some of the maps though, one map in particular, “Operation Locker”. This map is focused around close quarter combat and has little if any vehicle support. 64 players is uncomfortably cramped and even if the hallways and corridors had been opened up, the gameplay simply feels out of place. Battlefield has always been about being on foot, being on wheels or being in the air. Why they chose to have an almost entirely indoor infantry based map on the disc at launch is beyond me. We can only hope that the five map packs coming in 2014 get things straight and stick to what Battlefield does best. 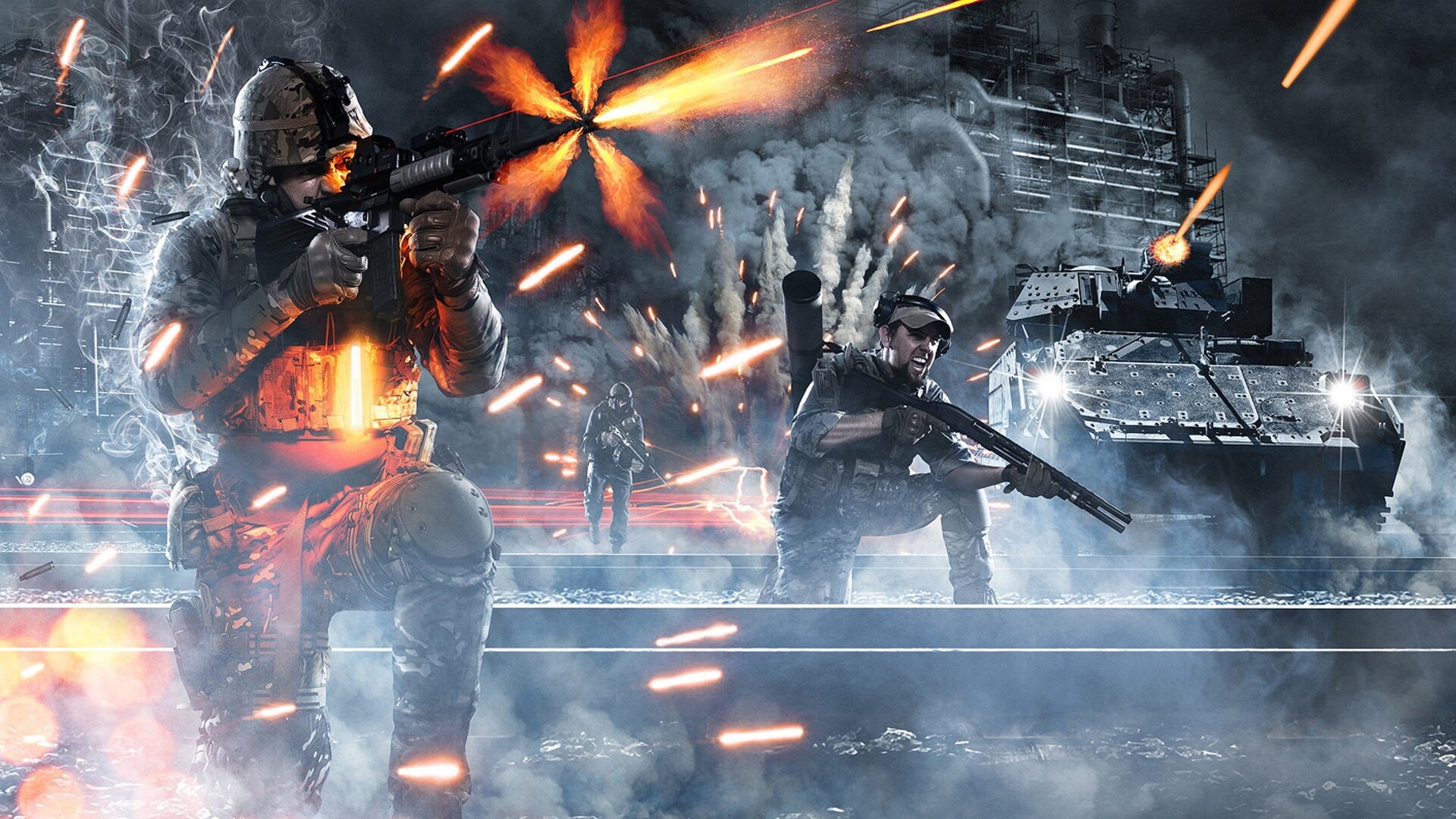 Those five map packs by the way can be conveniently downloaded early if you purchase a Premium membership through the in-game menu. I highly advise you do snag it, not only for the early access and discount on map packs, but also the priority matchmaking, exclusive double XP weekends and battle packs with bonus weapon attachments. The core gameplay mechanics are still around. Pick a class and within that build your load out of a primary and secondary weapon as well as additional tools like life saving defibrillators and tank repairing kits. Vehicles have had a major tweak to their main control scheme which for veteran Battlefield players will cause many moans and groans. Worry not though as you can change the controls back to being more familiar with the “veteran” scheme in the options menu. For newcomers of the series or folks that in the past just couldn’t keep their helicopters from diving straight into the ground, you may actually find the new “default” scheme to be more approachable. More players taking advantage of vehicles and actually being able to pilot them correctly make many match-ups an instant victory. Spawning seems much improved from prior installments and having squad members POV provided on the spawn screen gives you an opportunity to decide if it’s actually safe to be placed there. If you’re anything like me, Battlefield 3 was spent on many occasion spawning on teammates only to find them in the middle of combat leaving myself almost immediately exposed and out in the open. Bottom line, if you have played Battlefield in any of its previous iterations, you’ll have a pretty solid understanding of what you’re getting into. This time with even prettier graphics and more friends (and enemies) to play with. 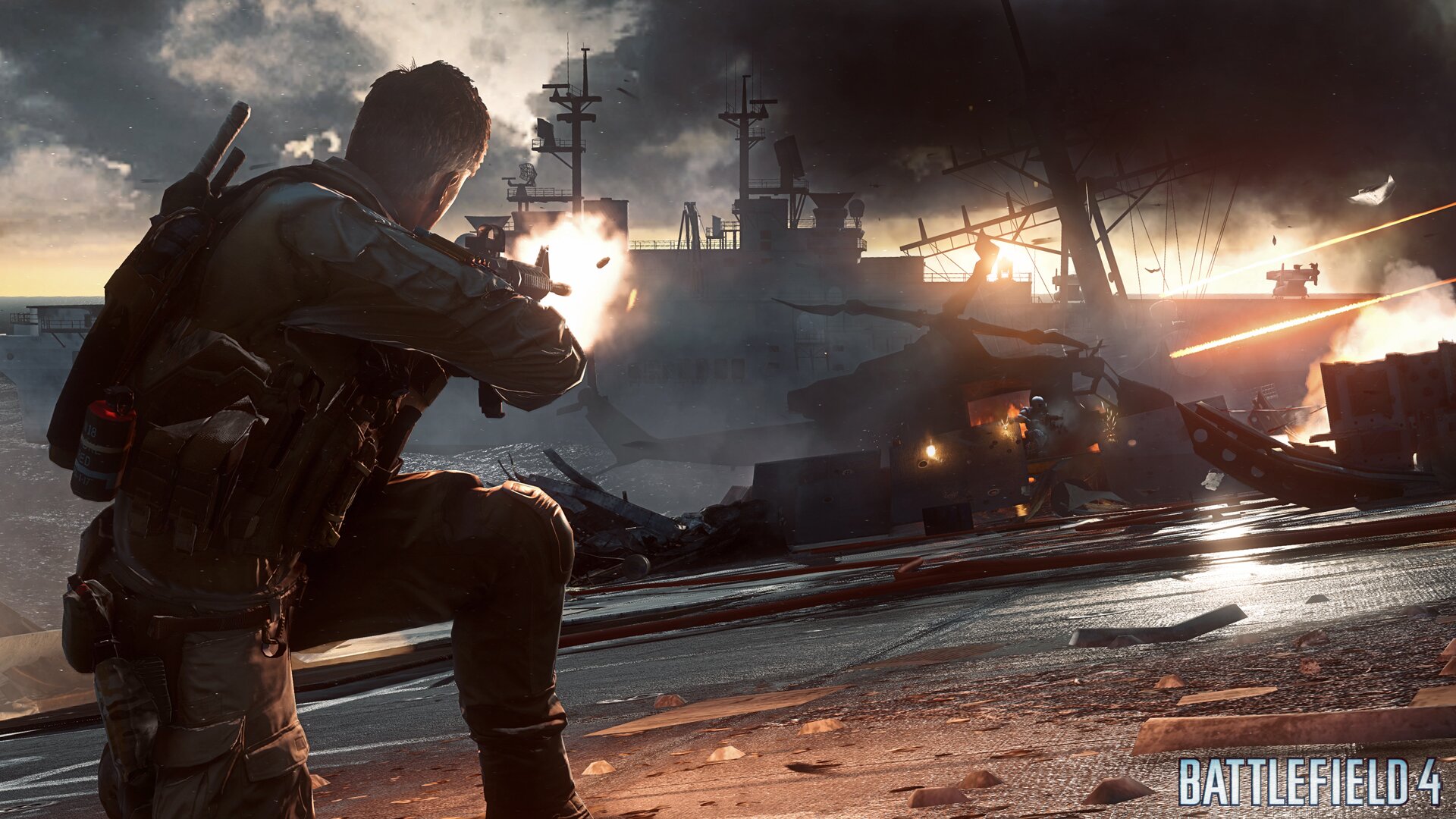 The single player campaign has never been important in a Battlefield release outside of offshoot series, Bad Company. BF4’s story isn’t far out of the realm of reality, but overall isn’t the most enjoyable, except for the characters. You are thrust directly into a mission to recover intel which informs you that China is facing a military takeover led by one Admiral Chang. If successful, China would gain support from Russia and become a powerful opposing force to the United States, something the US military has absolutely no desire to see. The gunplay is fun and the levels are fairly enjoyable with several blockbuster moments to keep your eyeballs busy, but the story becomes a bit of a lull. It’s just difficult for anyone to make war an intriguing backdrop for a story these days. Difficulty wise, this one is pretty easy. Playing through on Hard does not induce a rage coma, but instead offers a slight challenge for core gamers. If approaching BF4 with less experience, you’ll find Normal quite comfortable with forgiving enemy AI and the new “Engage” feature directing your competent squad members’ fire. It’s rare to feel a connection with characters in any action-war story, but when your squad mates face death, some meeting it before your very eyes, it tugs on your heart strings as a player. You feel responsible and thanks to the writing and performance, squad mates Irish and Pac immediately felt as crucial to my progression in this world as did the gun in my hands. Whether difficulty or emotional ties to characters matter to you, Battlefield 4’s single player campaign is a five hour affair worthy of at least one play through. Most likely though you will be picking this one up for the extremely large scale and approachable multiplayer, something that will not disappoint. As a last note of consideration to get the most out for your money, I would strongly encourage you play a next-gen version or play on a gaming PC that can handle the glorious Frostbite 3 engine. 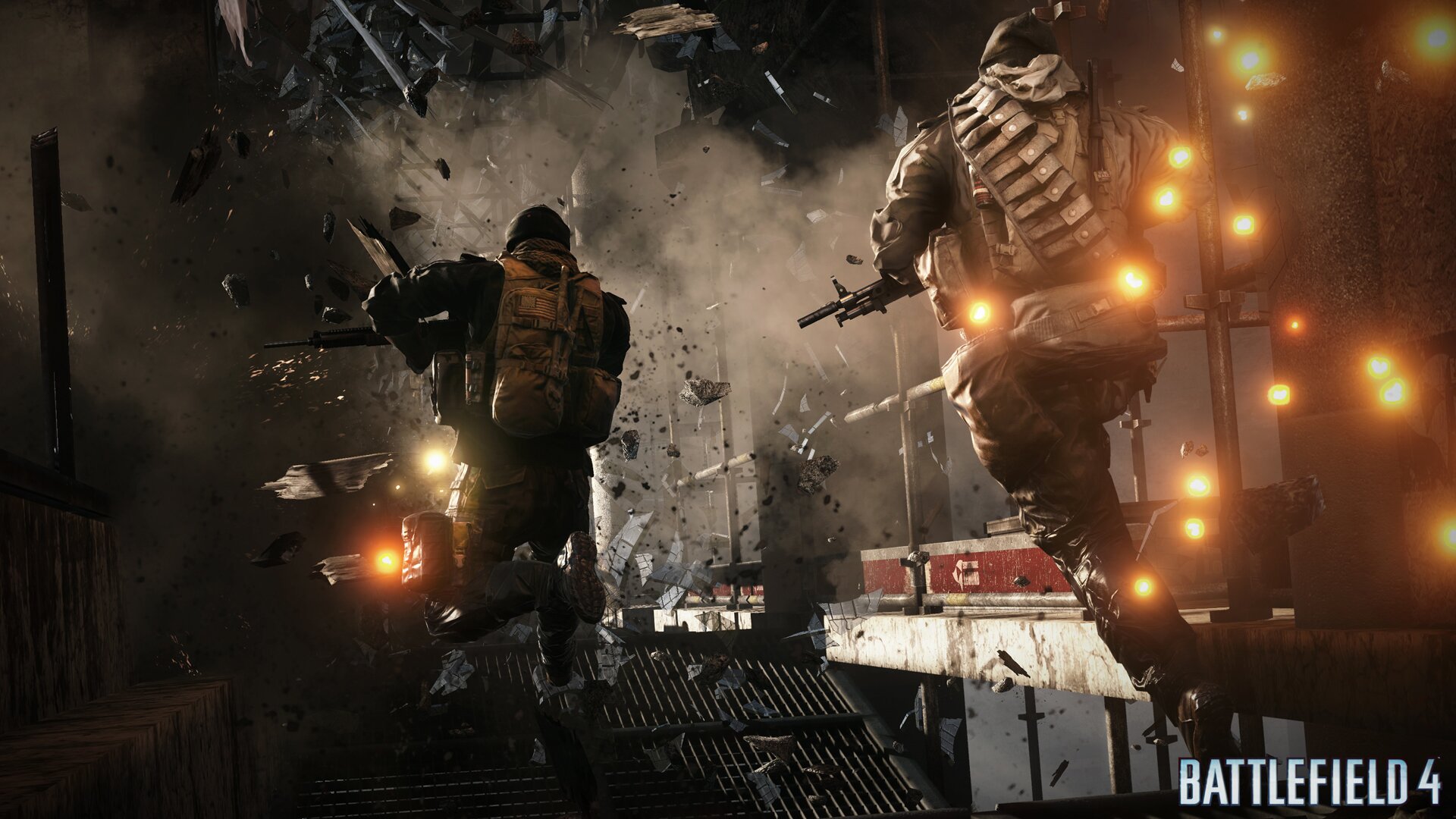 A note for PlayStation 3 owners looking to get the PlayStation 4 version via the download code provided in box. That code does not get you the upgraded version. It merely allows you to download the PS4 version at a greatly discounted price of $9.99/£9.99/€9.99. Once the code has been redeemed, find your way to the game’s page in the PSN Store and buy the game from there. The download will be 35gb. You would think you could play this digital version now without the your PS3 copy, but that is NOT the case. Your PS3 disc will be required every time you start up BF4 on your PS4. This was obviously meant to prevent gamers from buying the PS3 copy, upgrading to PS4 and then trading/selling their PS3 copy back, but I like to look for the silver lining. Now you own two copies of the game assuming you kept your PS3. If you have one console in the living room and the other in your bedroom, boom! Play Battlefield anywhere you are. Even more so with PS Vita Remote Play! Visit the official Battlefield 4 website http://www.battlefield.com/uk/battlefield-4 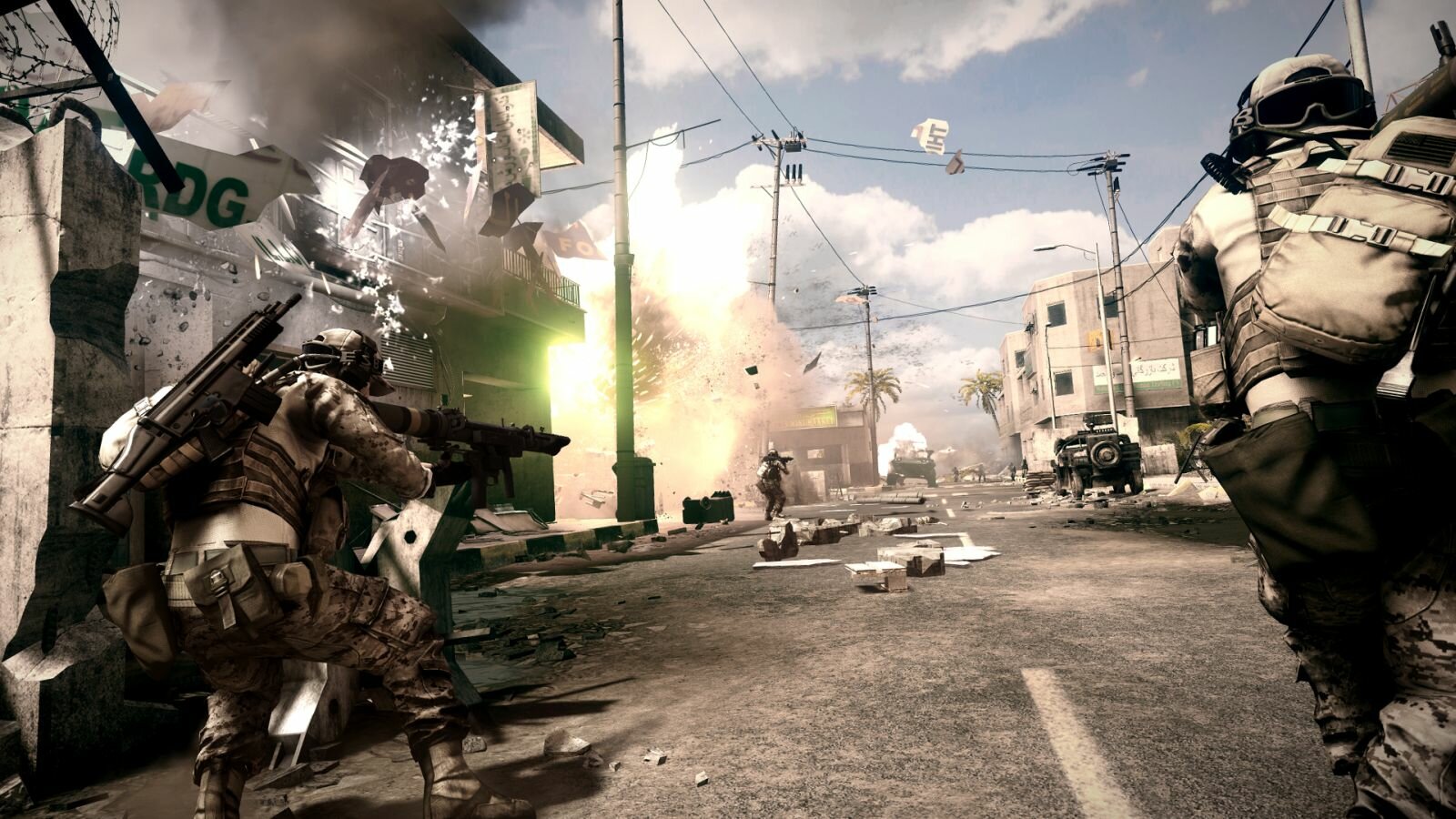