The Deer God is a pseudo procedurally generated side scroller/survival/exploration hybrid where the main character has become reincarnated as a deer. Along the game the player can solve puzzles to acquire new abilities as their deer grows over time, but death will result in respawning as a fawn once again. 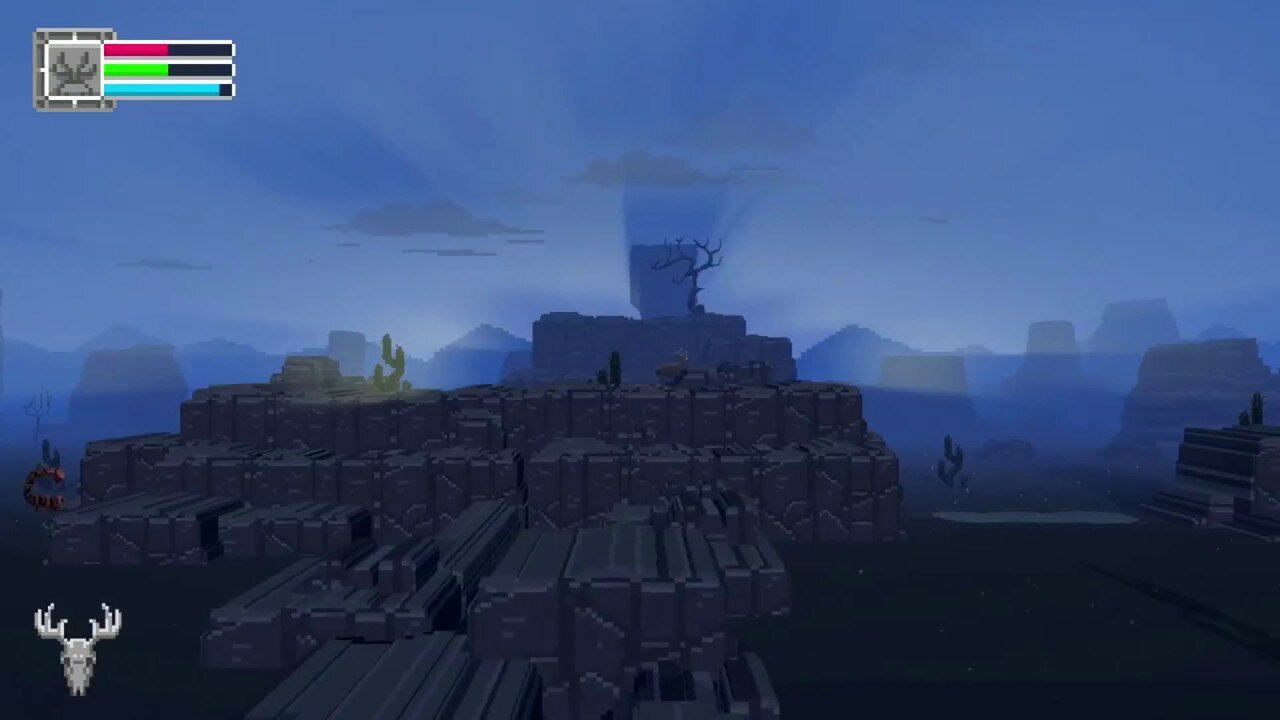 The player steps into the hooves of a hunter who, after meeting an unfortunate end, was reincarnated as a deer. It is explained that to pass on to the other life that he must prove that he is good natured by helping out various denizens of the forest including deer, a pastor, a small family, and a scuba diver.

The Deer God plays like a fairly typical side scrolling platformer, with players traversing a series of partially procedurally generated biomes while looking for quests to progress the game. These biomes each have a specific charm of their own with interesting variations to see each time they are cycled through, but there could have been more variation on the shuffled level designs to keep traversing from becoming stale. 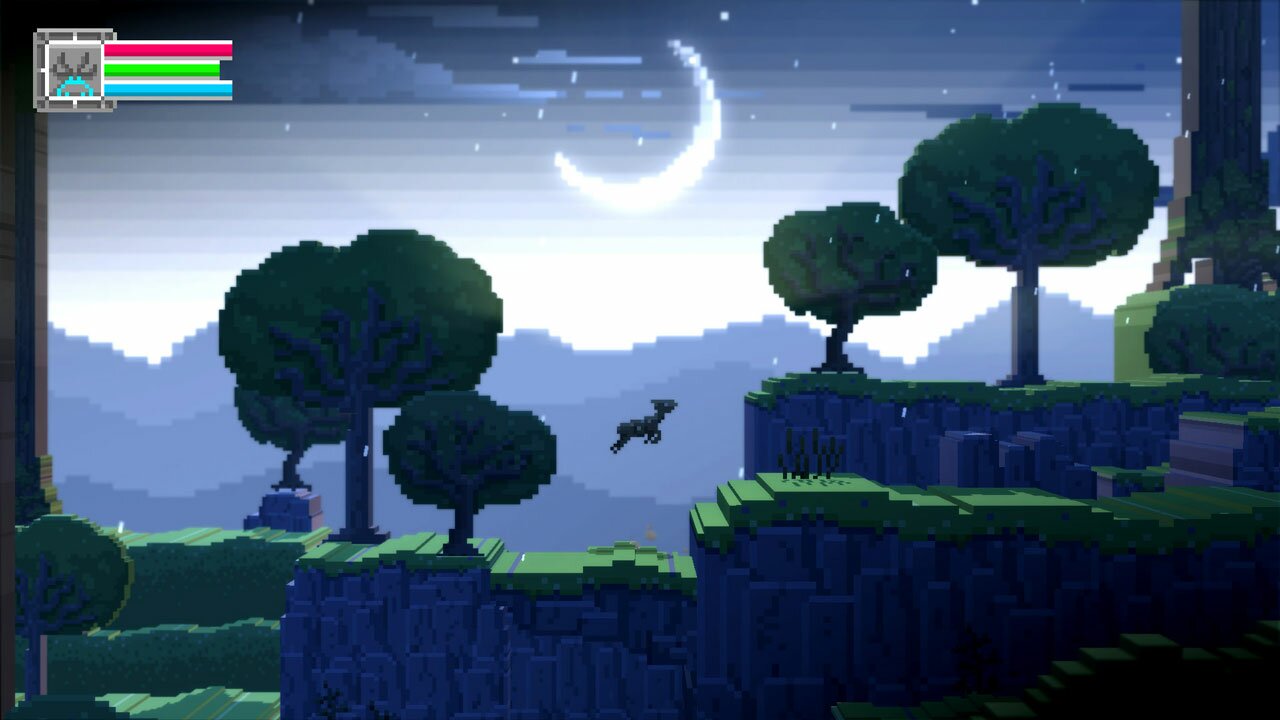 The Deer God makes the player manage health, food, and stamina bars while exploring, with food by far being the main focus for survival. Food can be extremely scarce at times and the player’s avatar will take slow damage over time when the bar is emptied. (Also, your food meter will continue to go down as your are talking to NPCs, forcing the player to read as quickly as possible and hope they did not miss some hint for progression) Scarcity of food along with biomes that quickly feels too similar can quickly wear on a player’s patience as they search for the next quest to further progress the game.

Causing an additional wear on patience were a few bugs that popped up throughout playing a rather short game. Folley sounds failed to activate a few times and the game’s avatar got stuck in a death animation for about twenty seconds upon one respawn. Those minor issues were not game breaking, but at one point the player avatar became stuck between a wall and an enemy while in the water and could not move or escape. After waiting for hunger and damage to initiate a respawn an extra life token triggered and I respawned in the exact same spot and was immediately trapped again.

Through the completion of puzzles players can gain abilities and spells for both combat and exploration, but the number of spells that may be selected for use is limited by how many points your deer’s antlers have. This means that when the player respawns they may only use the base two spells, but the physical abilities gained are not affected by respawn. 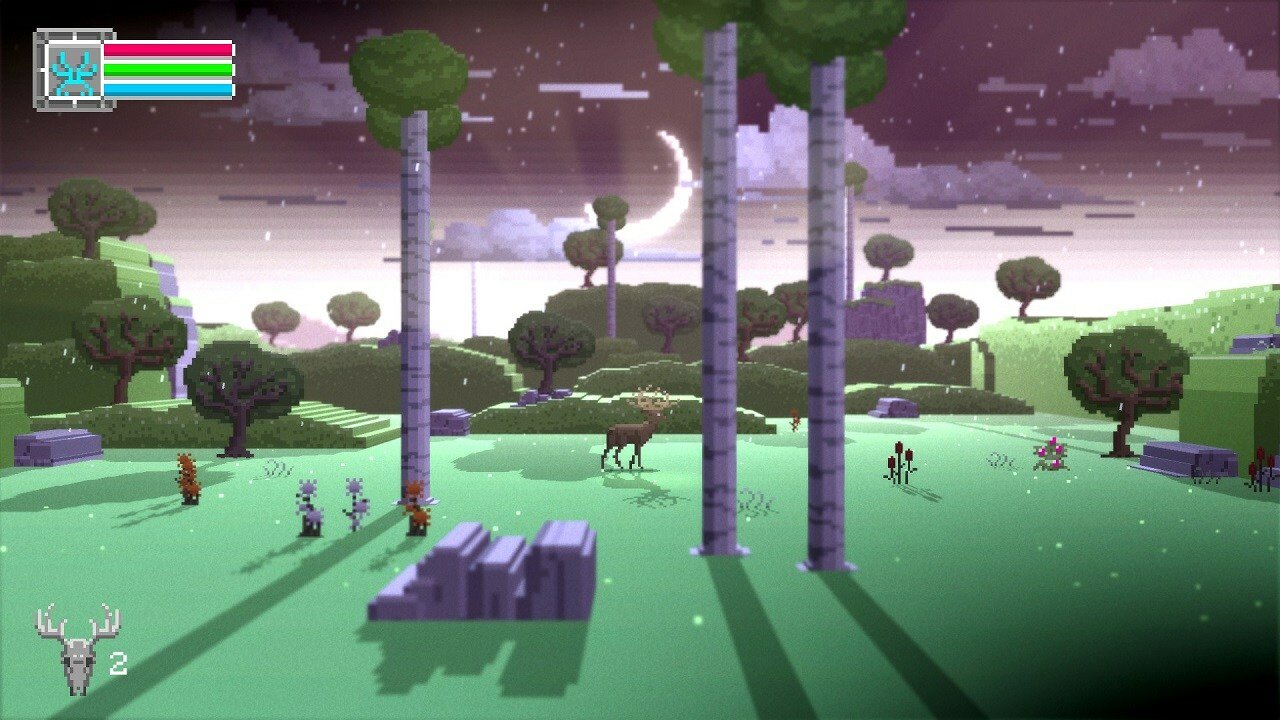 Overall the game itself felt a little bit aimless. I knew what I needed to do, but there were a fair amount of times the how escaped me. Some of these puzzles became a slight issue, either by requiring trial and error, having finicky hitboxes, or in one instance having the AI portion of a puzzle fail to trigger. The big issue with this is that to reset puzzles the player has to cycle back through the world, which meant that more often than not by the time I had gotten back to the puzzle the food meter was nearing empty.