American OSS Agent Karl Fairburne is back bigger than ever

The latest chapter in the award winning series, Sniper Elite 3 takes players to the unforgiving yet exotic terrain of WW2’s North Africa conflict in a battle against a deadly new foe

Set during World War II, this third-person shooter sees you take control of Lieutenant Karl Fairburne who’s mission is to go behind been enemy lines on a vital mission to shoot Nazis anywhere he can who are rumoured to be building some kind of weapon that could win them the war outright.

It must end here. You are the turning point. Because one bullet can change history…

You hit the ground running being handed the task of sniping a target in the distance and then reach its location, decision is what part of the targets body do you aim for? 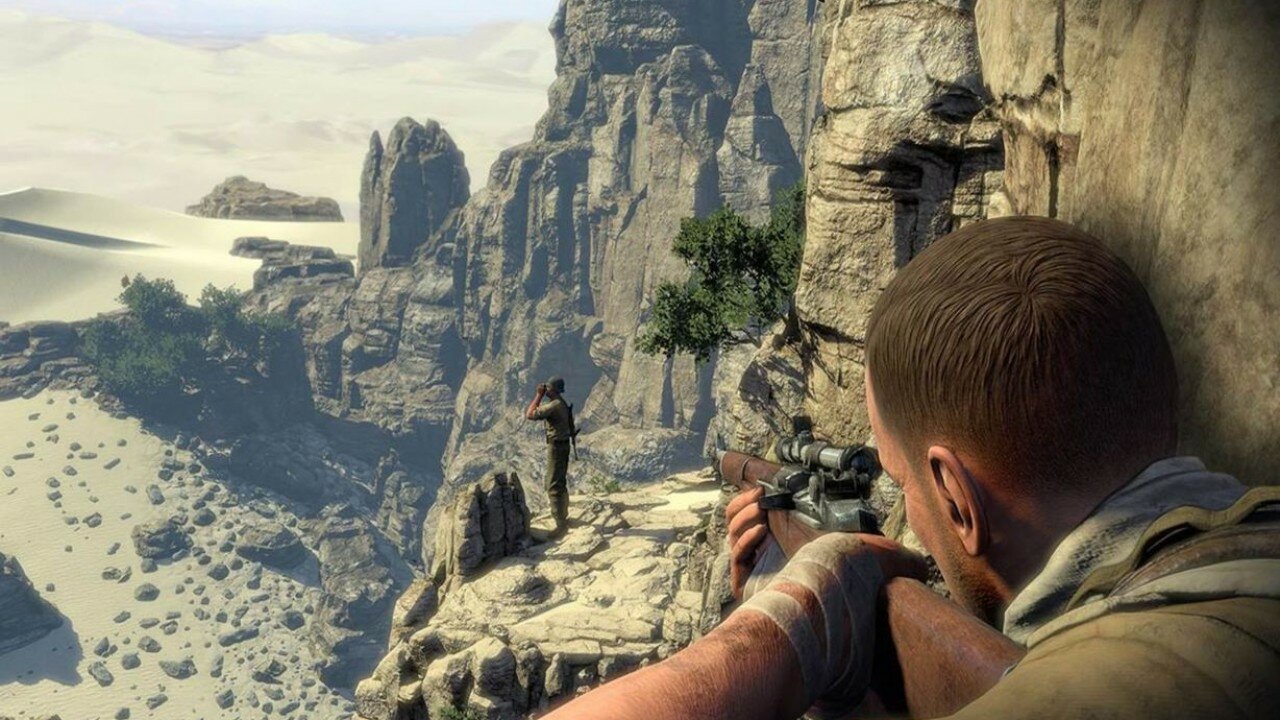 Sniping requires a steady hand and a lot of patience, as soon as you find your target do you crawl through the long overgrown grass and make your way up through the rocky hills or take the long route into camp? Sniping your target is not s simple pull thr trigger, you need to take account for both wind and gravity you’re also taught to hold your breath when pressing the trigger button, with a successful hit straight between the eyes an x-ray slow motion cut scene appears giving you a huge satisfaction your target was eliminated just as you planned.

Sniper Elite 3 does exactly what is says on the tin, this game is one of the finest Sniping games ever produced and as previous Sniper Elite games it involves stealth – sneaking up behind a rock trying to locate your target several miles away is what this game is all about. Compared to Sniper Elite V2 the maps are a lot bigger this time around and at no point funnels you into taking the only route, this makes eliminating your next target a bit more trickier at times rather than working your way up a hill taking out targets one by one. Your binoculars allow you to ‘tag’ your enemies so you don’t lose track of them, but rather than simply placing a small marker on your screen or map, you’re instead shown their full silhouette.

When firing at opponents from a long distance your whereabouts are still almost guaranteed to be discovered if you don’t disguise your shot. When you’re spotted, you simply run off to a different area, keep your head down until the coast is clear again then go about your business again. Everytime you take out your opponent you have a great feeling of accomplishment together with seeing how you just fired a bullet into your targets skull. Some missions are long, some can take up to an hour and a half to complete but checkpoints throughout the game are placed generously.

The co-op overwatch mode is where one player acts as a sniper and your teammate as a spotter making this time around a bag of fun with much larger maps, although you can only play on two of the really big ones.

There’s lots of potential replay value with this game, customisable loadouts and lots of weaponry to unlock as well as hundreds of collectables in the form of Nazi diaries, cards and ribbons.

If you’ve always fancied yourself as a Sniper and enjoy taking out enemies from a long distance then Sniper Elite 3 should be in your sights without question.