The first dlc map pack for Call Of Duty: Ghosts wait is finally over but does the presence of Michael Myers make it worth buying?

There is a very vocal section of gaming fandom that seems convinced that Call Of Duty has had its day and is only one sequel away from joining Tony Hawk’s and Guitar Hero in video game oblivion. They’ve been thinking that way for at least the last three years and yet Ghosts has already become the best-selling multiformat game on the Xbox One and PlayStation 4 (even if it does owe that position in large part thanks to America’s taste in sport).

If anything the problem with Onslaught is simply how predictable it’s all become, a complaint which you could of course aim at the parent game as well. As usual four map packs are planned for Ghosts, each with four multiplayer maps (at least one of which will probably be a remake), a co-op map, plus a new gun or other minor extra.

After playing for a few hours we found that the best map by far is Fog, and not just because it has the best gimmick: complete a field order and you get transformed into Michael Myers from the Halloween movies together with the Halloween theme music!

As soon as you hear it panic immediately breaks out on the map, whose visuals are a perfect hodgepodge of every cabin in the woods style slasher movie – from Evil Dead on up. Unfortunately this is a level of invention that is not shared by the other maps, which are just bog standard Call Of Duty designs, from the predominately brown colour schemes to the nondescript settings.

BayView comes the closest to being visually interesting it really shows off the next gen console skills, but even though it’s meant to be a Californian coastal town it still manages to look quite miserable. The trams scooting about provide some interesting cover though and you can call in artillery strikes from the destroyers moored offshore. But the numerous choke points and unpredictable elevated positions means that it’s a camper’s paradise to anyone that’s memorised the layout. 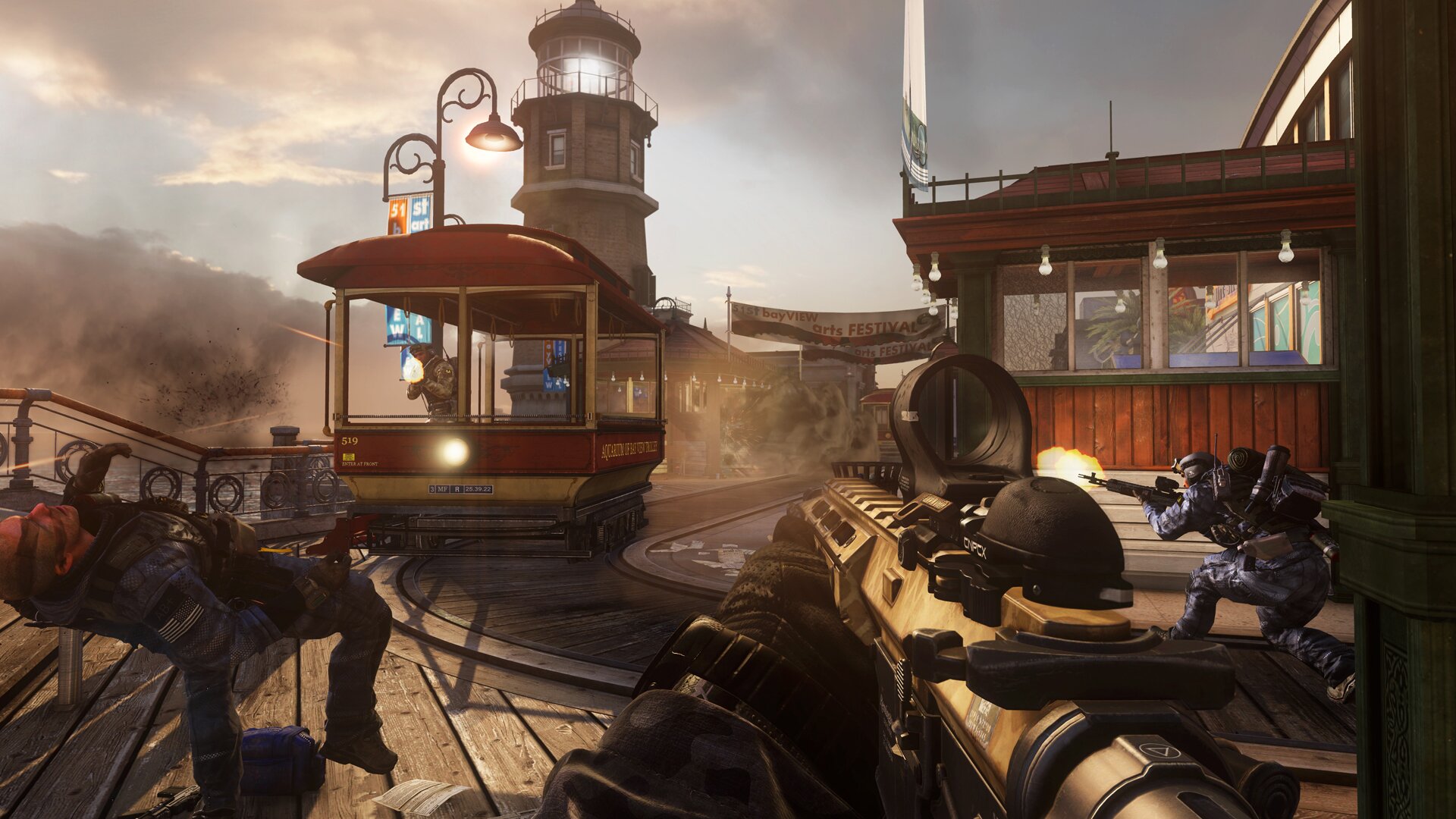 Containment is set in a rundown-looking Mexican village, with a central bridge filled with vehicles. One of these contains a radioactive missile which has the strangely specific effect of stopping your mini-map from working. That in itself is an okay gimmick, especially as you can blow it up with a field strike, but the map is visually bland and again seems specifically designed to encourage camping.

Finally, Ignition is the remake, turning Modern Warfare 2′s Scrapyard into a missile-launching facility. It’s still the same basic layout underneath, and with visuals and textures that feel like they’ve come out of some Call Of Duty clip art collection. The gimmick (sorry, we should probably be calling these ‘dynamic events’) is simply igniting a test engine. Which we don’t think we need to tell you is not as exciting as suddenly turning into Michael Myers.

Compared to other multiplayer games even the least interesting maps are still above average but we don’t know why Infinity Ward didn’t just run with the horror icon theme and make each map based on a different one, like Freddy, Jason, and Pinhead or something. Anything really that wouldn’t have left you with one cleverly imaginative map and three that look like they were designed by a computer rather than the person using it.

Extinction (we loves it) is essentially Infinity Ward’s version of Zombies, only with aliens instead of the undead. It was one of the best new features of the parent game and each of the new map packs will include a new ‘episode’ which, again like Zombies, will provide a backstory to the otherwise unexplained invasion.

Episode 1 is called Nightfall and although it feature yet another Call Of Duty mainstay – the snowbound military base – you get two new aliens to fight and a new weapon that’s powered from squashed xenomorph goop. The big new boss character is good fun too and although the alien designs are disappointingly generic it’s a good co-op game and much more focused than most Zombies maps, with competent teamwork giving anyone a reasonable chance of seeing the ending.

So, there are a few good elements to this map pack and a lot of sadly predictable ones, but what disappoints us the most is the price. Everyone has spent between £40 and £50 already for the disc then they charge nearly £12 for this dlc making it very expensive overall.

Atelier rorona plus the alchemist of arland Review