Headmaster simplifies your virtual reality experience to a single mechanic. Forgoing the use of any controllers, it instead uses the motion tracking of the headset to present you wit one simple task: a soccer ball is coming.

Headmaster surprisingly presents something of a story for a game that could have gone entirely without one.

fairly suspect soccer training camp, Headmaster surprisingly presents something of a story for a game that could have gone entirely without one. You’re the academy’s newest recruit, with a full training regimen set out to help you master the art of heading a ball. Starting with simple missions to hit the ball at varying heights and angles, the game importance of utilising the right, stiff-necked motion to head the ball without causing strain to your neck. Given the half-kilo weight of the PS VR headset, its an important lesson – and not following the game’s instruction leaves you very sure of what you’re doing wrong after only a few motions. 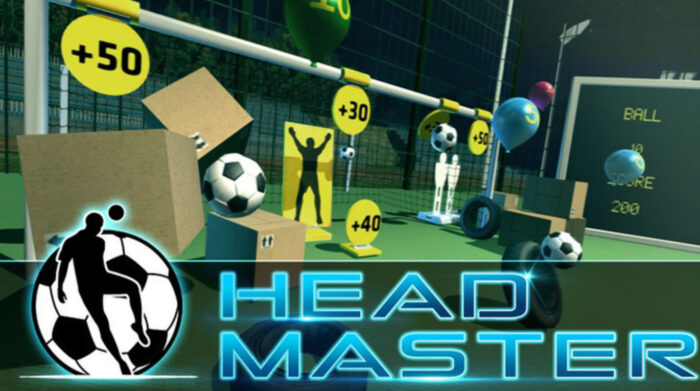 Once you move on from the early missions, Headmaster challenges you to become more precise and accurate with your movements to hit targets and narrowed spaces in and around the net. Each mission is graded on a three-star scale, with a minimum of one required to pass. Three stars give you a bonus object of some kind for your dorm room hub, with progress gated by exams that require a certain number of stars.

Initially this progress feels really natural and smooth, but it soon spikes in difficulty around the first exam. It’s hard to tell if this is the fault of the game’s tracking – which in my experience seemed to skew to the side after an extended session, making precise shots all but impossible – or my complete lack of hand-eye coordination and sports skill. The early levels made me feel like I had some level of skill, but this quickly faded when the more demanding missions left me feeling like the angles I had come to understand no longer worked.

As intuitive as the heading mechanic seems, it isn’t perfect. Playing for a number of missions, I found the play space would re-centre itself based on my current position, which is great in theory. What it actually meant was that it continually tracked to one side, ending up with me having to lean entirely out of my chair to even register movement to the right after a few missions. While this may be the fault of early-days hardware for the VR itself, the game offers no way to recalibrate mid-play the way many others have.

Headmaster is a solid experience for testing out the PS VR’s functionality but at its core, the mechanic isn’t sustainable.

Overall Headmaster is a solid experience for testing out the PS VR’s functionality but at its core, the mechanic isn’t sustainable. The game even warns you not to play for too long to avoid any strain, and the frustration of not-quite-perfect tracking can leave mission failures feeling imposed rather than earned. The story threading through the game is entertaining and did make me chuckle a few times, but I’m not sure it’s enough to keep me invested. It’s a unique use of the hardware to be sure, but it might not quite be there yet.

Get Call of Duty: Infinite Warfare Free When You Buy PS4 November 4-5