Roughly nine years ago Call Of Duty: Modern Warfare was released into the wild. Making the switch from the historical battles of World War II to the military technology and weaponry of present day, the already popular COD series became a juggernaut video game franchise breaking sales records left right and centre.

nitially, Call Of Duty 4 was notable as much for the ditching of its Second World War setting as it was any of its gameplay innovations. In 2007 the notion of first person combat in the modern era was still a novelty, and the opening level where you storm a tanker as part of a SAS team was shocking in its cinematic bombast, and deceptively clever in how it hid its linearity and lack of interactivity. The story campaign may be criticised as shallow but it’s not trying to be Half-Life 2, it’s trying to be a Michael Bay film in video game form. And on those terms it succeeds perfectly.

Currently only available to those willing to spend the extra coin on the Legacy, Legacy Pro and Digital Deluxe editions of Infinite Warfare, Call of Duty: Modern Warfare Remastered offers only improvements to textures and lighting effects. The game itself remains unchanged and while an excellent game in it’s day, COD: MWR often shows its true age with animations looking just a little clunky by today’s standards and a few small missteps that were present in the original which could have, and should have been amended in this new and improved version.

For example, an early mission has you on the roof of a TV studio firing at what turned out to be a never ending stream of enemies on the ground below. Only when I ran out of ammo did I realise that behind me my squad mates were waiting for me to take point through a door and lead them down stairs to the floor below. Had I held infinite ammo, that stream of enemies could have continued for an hour and my ever so patient squad would have been standing there like idiots without so much as a “Hurry up, Soap!”. At that point I was hit with a sense of déjà vu, remembering I faced the exact same situation when playing Modern Warfare nine years ago. 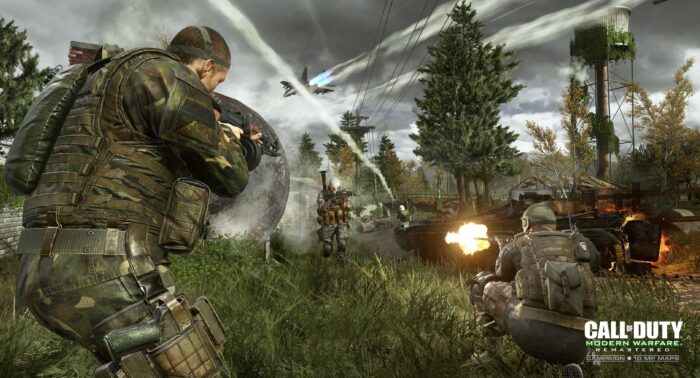 This is a problem that rears its ugly head several times in the early stages of the campaign. While the action is intense and exciting, it often overwhelms to the point where you easily miss audio queues from your squad mates resulting in repeated mission failures and/or deaths simply because you have no idea where to go or what to do. Perhaps these problems were ignored for the sake of authenticity but I couldn’t help but feel this was a missed opportunity to bring what is an excellent single player campaign a little closer to the realm of perfection.

Where this version of the title has improved significantly is on the visual side of things.  From the very first mission the higher resolution textures and beautifully rendered lighting effects are more than than just a fresh lick of paint. Instead it’s as though Modern Warfare was found in an archaeological dig, then carefully and lovingly restored by museum staff so the current generation can enjoy it.

While many may feel the COD series has lost its way with it’s current take on futuristic warfare, there’s no denying that COD 4 was the game that made this series so popular. It’s classic campaign – and multiplayer when it’s available in a few weeks- would be a worthy addition to the growing numbers joining remastered club if it had been available as a stand alone purchase.

The decision to only release MWR with purchases of the upcoming Infinite Warfare and the apparent intent on never making it available as a stand alone game appears to be a desperate cash grab. This sales model either assumes that every COD 4 fan has been a dedicated franchise devotee for the past nine years which is most certainly not the case, or it hopes that hardcore COD 4 fans will be willing to shell out just to play the remastered version of their favourite game.

Sportsbar for PSVR gets More Games, Toys and Fixes

How To Install Xbox One S Games Faster